Nationwide, a total of 5,333 fatal work injuries were recorded in 2019, up from the 5,250 fatal injuries in 2018, according to the results from the Census of Fatal Occupational Injuries (CFOI) program. 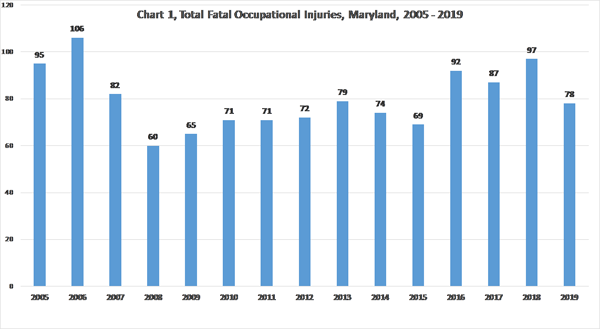 Source: MD DLLR, Division of Labor and Industry in cooperation with the U.S. Bureau of Labor Statistics, CFOI Program, December 2020.

Nationally, transportation incidents was the most frequent fatal workplace event in 2019, accounting for 40 percent of fatal work injuries. (See chart 2.) Falls, slips and trips was the second-most common fatal event (17 percent), followed by violence and other injuries by persons or animals (16 percent), and contact with objects and equipment (14 percent). 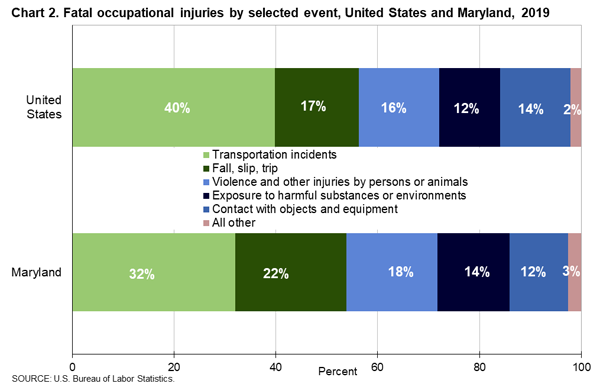 The Maryland Census of Fatal Occupational Injuries (CFOI) program collects and publishes statistics on all fatal work injures occurring in the State of Maryland. Maryland CFOI is conducted within the Maryland Department of Labor, Licensing and Regulation, Division of Labor and Industry in cooperation with the U.S Department of Labor, Bureau of Labor Statistics. CFOI’s published results are the U.S. government’s official tally of workplace fatalities for the nation. Maryland has participated in the CFOI program every year since the program’s inception in 1992.

CFOI provides for a complete accounting of all fatal work injuries that occur in Maryland each year. The program uses diverse data sources from a variety of federal, state, and local government administrative records, as well as the media, in order to substantiate and profile fatal work injuries. CFOI includes data for all workplace fatalities regardless of whether the fatality was under the regulatory authority of the Maryland Occupational Safety and Health agency or other federal and state agencies. Any comparisons, therefore, between the CFOI program’s counts and those released by other agencies or sources should take into account the different coverage requirements and definitions being used.

For a fatality to be included in this census, the decedent must have been employed (defined as working for pay, compensation, or profit) at the time of the event, engaged in a legal work activity, or present at the site of the incident as a requirement of his or her job. Fatalities to volunteers and unpaid family workers who perform the same duties and functions as paid workers are also included in the count. These criteria are generally broader than those used by state and federal agencies administering specific laws and regulations. (Fatalities that occur during a person’s normal commute to and from work are excluded from the census counts.)

Data presented in this release include deaths occurring in 2019 that resulted from traumatic occupational injuries. An injury is defined as any wound or damage to the body resulting from acute exposure to energy, such as heat, electricity, or impact from a crash or fall, or from the absence of such essentials as heat or oxygen, caused by a specific event or incident within a single workday or shift. Fatal injuries included in the fatality census are open wounds; intracranial and internal injuries; heatstroke; hypothermia; asphyxiation; acute poisonings, resulting from short-term exposures limited to the worker’s shift; suicides and homicides; and work injuries listed as underlying or contributory causes of death.