Nonfatal Occupational Injuries and Illnesses in Maryland for 2014

Over 68 thousand new cases of occupational injury and illness were reported by Maryland’s private and public sector employers in 2014 according to the latest results of the Survey of Occupational Injuries and Illnesses or (SOII) program. SOII is a cooperative program between the Maryland Department of Labor, Licensing and Regulation, Division of Labor and Industry and the U.S. Department of Labor, Bureau of Labor Statistics. In 2014 there were approximately 2.42 million workers in the State under the Maryland Occupational Safety and Health (MOSH) agency’s regulatory oversight.

Occupational injuries and illnesses among Maryland’s private sector workers occurred at a rate of 3.1 cases per 100 equivalent full-time workers. The TRC rate represented a slight increase over the previous year’s rate of 3.0. The injury and illness incidence rate for cases of a more serious nature involving days away from work, job transfers, or restrictions, commonly referred to as the DART rate, also increased slightly from 1.5 cases per 100 full-time equivalent workers the previous year to 1.7 in 2014. Of the 52,400 cases reported by private industry, 97 percent were injuries with the remaining 1,500 being cases of occupational illness. 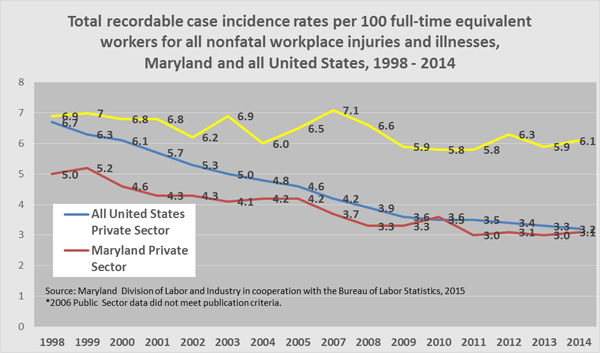 Occupational injury and illness estimates have been published for State and local government in Maryland every year since 1979. Representing some 343,000 workers, the public sector representing all State and local government entities reported 16,200 new cases of occupational injury and illness in 2014, an increase of 700 cases over the previous year. The total recordable case (TRC) incidence rate was 6.1 cases per 100 full-time equivalent employees. This represented a three-percent increase from 2013 and can be attributed primarily to the increase in Local government’s rates. The public sector continues to report some of the highest injury and illness rates in Maryland. For the seventh consecutive year Maryland’s public sector has remained above the national average. Currently the national public sector average is 5.0 injuries and illnesses per 100 full-time equivalent workers.

With 4,400 reported cases (400 fewer than 2013), and occurring at a rate of 4.8 injuries and illnesses per 100 full-time equivalent workers, Maryland State government recorded the lowest TRC rate since 2006. State government’s rate declined 6 percent from 2013’s rate of 5.1. Of the cases reported 1,900 were severe enough to require the injured or ill worker to take at least one day off from work to recuperate. In spite of a top-line rate decline, certain industry rates within State government remain high.

An estimated 11,800 injury and illness cases were reported by Maryland’s county governments and local municipalities in 2014. At 6.7 injuries and illnesses per 100 full-time equivalent workers, local government experienced a 5 percent increase over 2013’s rate of 6.4. For 2014, Local government’s TRC rate remains above the national average by 24 percent. Maryland local government has recorded TRC rates above the national average every year since 2009. Of the cases reported for 2014, 5,300 were severe enough to require the injured or ill worker to take either days off for recuperation, a job transfer, or be assigned some type of work restriction. In 2014, over 243,000 workers were employed by the State’s counties, local governments and municipalities. Some notably high industry rates in Local government were: 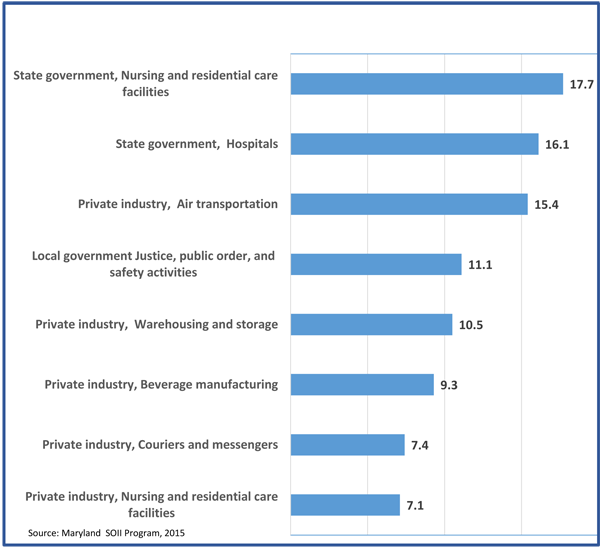 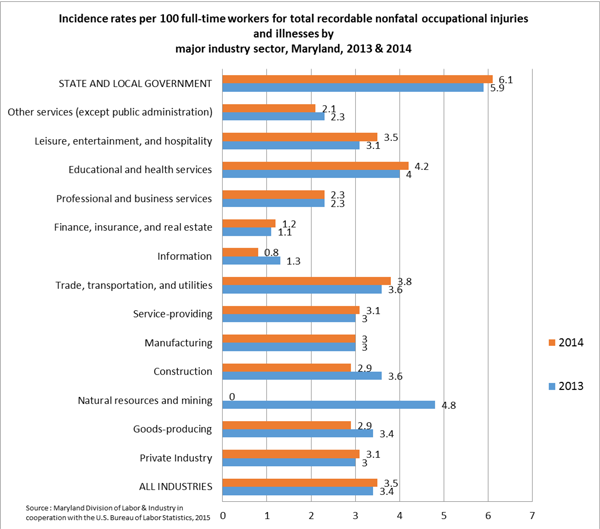 Background of the Survey

The Survey of Occupational Injuries and Illnesses (SOII) is a cooperative program between the State of Maryland’s Department of Labor, Licensing and Regulation, Division of Labor and Industry and the U.S. Department of Labor, Bureau of Labor Statistics. SOII provides estimates of the number and frequency (incidence rates) of nonfatal occupational injuries and illnesses by industry code as defined by the 2007 North American Industry Classification System (NAICS) manual. The SOII program also provides details on the circumstances and characteristics of the more seriously injured and ill workers. These injury and illness estimates are based on safety and health logs that, by law, employers are required to keep. Occupational injury and illness statistics have been published for Maryland’s private sector every year since 1972 and for State and local government from 1979 forward.
The SOII program utilizes an employer-based questionnaire to collect occupational injury and illness data. Questionnaires are mailed to a scientifically selected random sampling of businesses in Maryland. The responses are compiled, tabulated and published annually.

Statistical sampling techniques are used to produce the estimates. Because the results are based on a random sampling of establishments in the universe file (the universe is all operating in-scope establishments in Maryland’s unemployment insurance tax file), the estimates probably differ from the figures that would be obtained if every establishment in the State had participated. To determine the precision of each data estimate, a standard error is calculated. The standard error defines a range (confidence interval) around each estimate. Relative standard errors are calculated for every SOII estimate produced.

Excluded from the SOII are the self-employed, farming operations with fewer than 11 employees, private households and federal government agencies. Occupational injury and illness data for coal, metal and nonmetal mining, and for railroad activities were provided by the U.S. Department of Labor’s Mine Safety and Health Administration and the U.S. Department of Transportation’s Federal Railroad Administration, respectively.

Collecting occupational illness statistics remains a challenge with the true number and rate difficult to measure. Unlike injuries, which result from sudden, acute events that are easily observed, reported and documented, many types of occupational disease are not diagnosed until long after the initial exposure to workplace carcinogens and other toxins have taken place. It may be years before the cumulative effects of these exposures present as occupational disease and the ill employee may no longer be in the workforce. Because of this, it is believed the incidence of certain long-term, latent forms of occupational disease is understated by the SOII. The overwhelming majority of the reported illness cases are those that are easier to directly relate to the workplace such as contact dermatitis or carpal tunnel syndrome.
The Bureau of Labor Statistics’ Survey of Occupational Injuries and Illnesses is the U.S government’s primary source for charting the nature and magnitude of the occupational injury and illness problem across the country.

SOURCE: Maryland Department of Labor, Licensing and Regulation, Division of Labor and Industry in cooperation with the U.S. Department of Labor, Bureau of Labor Statistics, Survey of Occupational Injuries and Illnesses, 2014. Incidence rates represent the number of injuries and illnesses per 100 full-time workers.
*2006 occupational injury and Illness data for State and local government did not meet publication criteria.

1 All employment data derived from the Maryland Department of Labor, Licensing and Regulation, Office of Workforce Information and Performance, Employment and Payrolls, Industry Series, 2014.
2 Incidence rates represented the number of injuries and illnesses per 100 full-time equivalent workers and are calculated as (N/EH) x 200,000 where:
N = number of injuries and illnesses
EH = total hours worked by all employees during the calendar year
200,000 = base for 100 equivalent full-time workers.