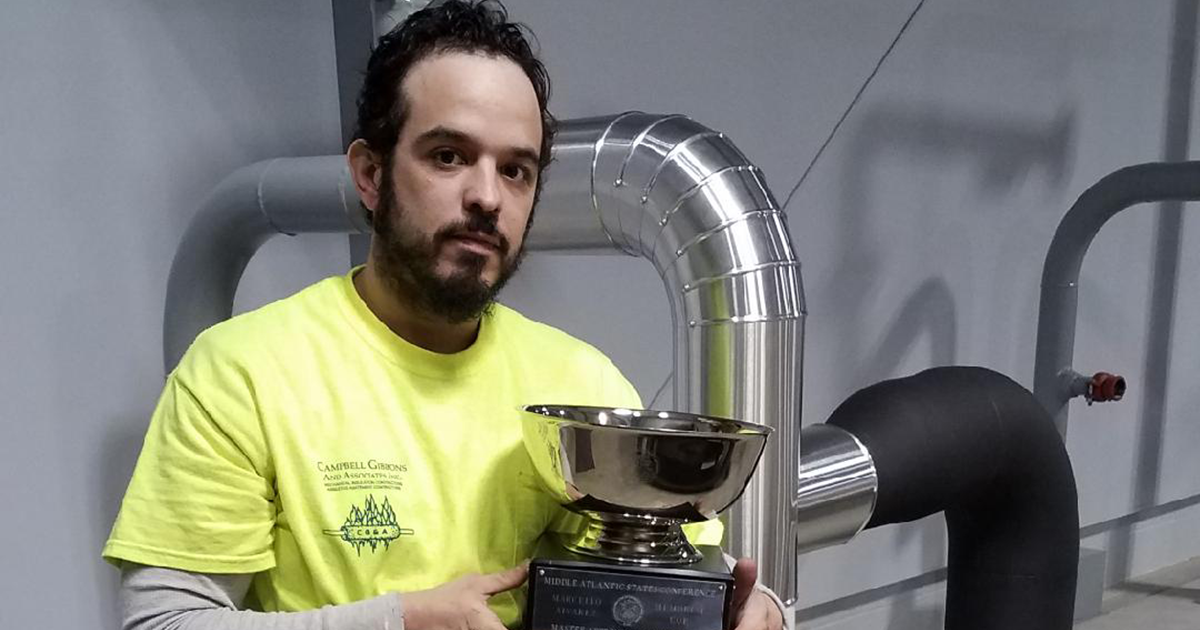 In 2002, The International Association of Heat and Frost Insulators and Allied Workers piloted its Master Apprentice Competition (MAC) in the Mid-Atlantic Region of the country. The following year, the program was introduced to the entire organization at the Annual Joint Apprenticeship Conference in Los Angeles, CA, where five conferences sent apprentice competitors. Heat and Frost Insulators and Allied Workers Local 24 proudly competed in both the pilot and the international competitions and has continued to do so as the competition has grown and is now attended by every regional conference in the United States and Canada. Each year, ten competitors work hard to get their name on that coveted trophy, the MAC Cup!

In 2005, Local 24 Apprentice Marcelo Alvarez, won the Mid-Atlantic States regional conference competition and represented the Local 24 Apprentice Program in Indianapolis. He was not fortunate enough to win the regional competition, but what a fantastic experience he had competing for his Local and meeting other apprentices from across the US and Canada. Subsequently, he graduated as an apprenticeship and received his journeyworker certificate shortly thereafter. Tragically, in 2007, Brother Alvarez suffered fatal injuries while working on the job. A working man’s dream became a nightmare leaving behind his wife, Jeanna and two children, Gabriel and Paula. In 2008, The Mid Atlantic Conference of the Heat and Frost Insulators International honored the memory of Marcelo by naming their trophy the Marcelo Alvarez Memorial Cup.

Julio Caicedo is a fourth year apprentice with Heat and Frost Insulators and Allied Workers Local 24. He started his apprenticeship in March 2015 and quickly showed he had the skills to be at the top of his class. Though faced with the struggles many young men face, he continued to excel through first, second and third year of apprenticeship. Campbell Gibbons and Associates, a signatory employer, has also noticed Julio’s promise and has kept him employed, giving him more and more advanced tasks as he has progressed through his time. Julio also represented Local 24 at the Mid-Atlantic States competition in 2018 but wasn’t quite as skilled as the winner from Local 14 in Philadelphia. On March 9, 2019, Julio competed once again and was successful in capturing the Marcelo Alvarez Memorial Cup, a proud moment he will never forget. Julio represented the Mid Atlantic Conference at the International Master Apprentice Competition in Phoenix, AZ, May 18 – 25, 2019.